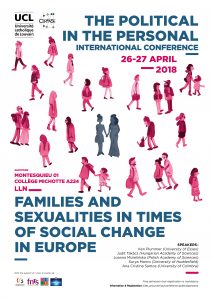 The conference is organized by the Interdisciplinary Research Center on Families and Sexualities (CIRFASE) at the University of Louvain (Louvain-la-Neuve, Belgium). The official language of the conference is English.

This conference seeks to explore diverse forms of intimacy and family, particularly in relation to LGBT and other non-normative sexualities. We want to highlight how personal lives are embedded in the public and the political, and how changes in the wider context affect these expressions of gender and sexual identifications and influence family relations and structures. We are also interested in providing a temporal dimension or a comparative or transnational perspectives to such analyses.

Against the backdrop of the late-modern trends of individualization, the matters of choice and identity are increasingly shaping the debates and regulations related to the body, reproduction and intimate relationships. In Europe, various nation-wide surveys testified to the often liberalizing shifts in public opinion related to gender and sexuality. Likewise, many European countries have recently experienced expansions of rights related to, for example, access to reproductive technologies and adoption, recognition of same-sex unions and legal gender recognition.

These developments have led some to believe that the achievement of gender and sexual equality in Europe is inevitable. However, recent years have also witnessed a rising of resistance to this end, with gender and sexuality issues increasingly forming the backbone of morality politics and “cultural wars” across Europe. Debates about reproductive rights, same-sex marriage, same-sex parenting or trans rights increasingly lead the public to question the definition and nature of men and women, sex and gender, marriage and family. The perceived degradation of the “natural” gender and sexual order and the perceived threat to the traditional models of marriage and family have led to a conservative backlash, often in the form of anti-gender mobilizations and legislation that backtracks on certain developments (e.g. limiting previously wider access to assisted reproduction) or imposes new restrictions (e.g. amending constitution to define marriage as a union between a man and a woman).

All these developments shape the public discourse and impact the socio-institutional contexts within which individuals with non-normative gender and sexual identifications live their lives and form their families. Their bodies, identities and partnerships are made the object of public and political debates and are subject to expanding or shrinking of rights. In this conference we will explore such links between the private and the public / political along various tracks.